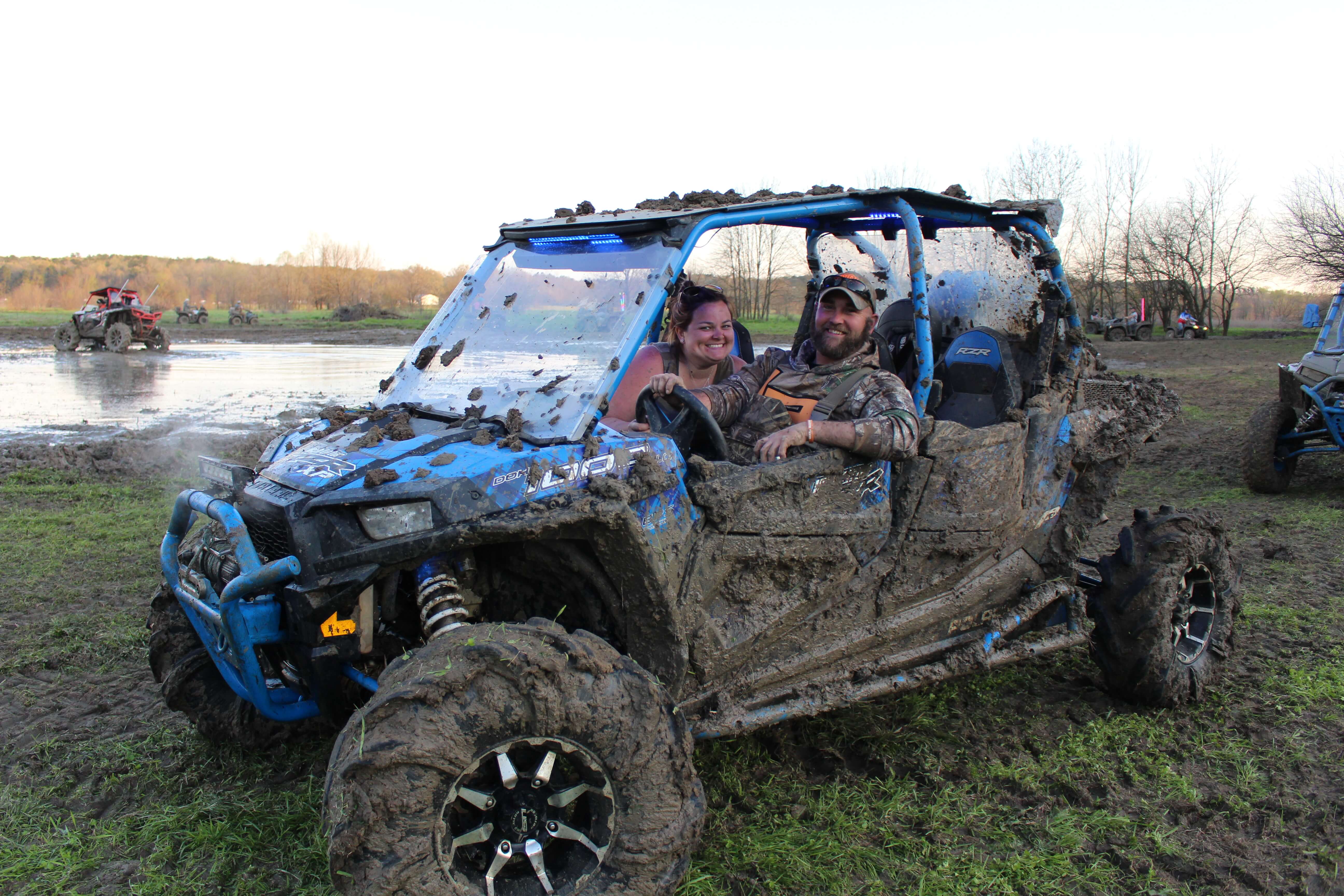 “My buddy and I kept telling each other y’all didn’t charge enough at the gate! The amount of fun we had was way over the price of admission! Not telling you guys to go up on the price, but I just saying y’all put on an amazing event at an amazing location!!” – Mitchell Callais, Brusly, LA

“Had a great time, thought it was well put together for the time you had. No doubt it will be even better next year. My recommendations: more wash bays and a second way out. It took my dad 3.5 hours to get out Sunday. Other than that, mud was fun and separated the men from the boys.” – David Jones, DFW ATV, Fort Worth, TX

“For the day I was there, I had a blast. We left early due to the rain/cold front and a couple of the crews SxS breaking. Lots of mud! Loved the free shirts Can Am was doing.” – Rachael Elmore, Benton, AR

“This is our first Mud Nats we’ve been able to attend besides the smaller one at Mulberry in November 2017. We usually go to River Run in Jacksonville, TX but decided to make a shorter trip to Mud Nats this year. It was totally worth it! Best event we have been to by far. Broke two axles in one mud hole, and it was totally worth it. Thanks for such a great event!” – Justin and Caitlan Ridpath

“We traveled from Toronto, Canada and still somehow managed to bring more machines, gear and spear parts than the locals. I blame my OCD nature. Anyways…

After setup, we decided to head out at about 10 pm Saturday for a quick burn. Needless to say the virgin park was still difficult. We found ourselves in the pouring rain 5 hours later with nearly every machine out of fuel. What a ride! That set the stage for the remainder of the week no doubt.

As people started to roll in and the ruts got deeper and deeper, we knew our machines with 36’s would struggle. Funny to think eh? Anyways, there are so many highlights to mention:
– DTV Shredders we brought were a huge hit.
– @freeman408 skimming the huge pond in his X3.
– Me entering an impromptu race with a racing SxS at Party Cove and winning. Kinda.
– Swamped one bike and about 12 broken axles.
– Having the best week of our lives and getting to ride the park with its owners.” – Nick Frenette, @kingbossquad, Toronto, Canada

“I had a great time at Mud Nats. Me and a few buddies came and stayed in a camper and had a blast. As soon as we got there, we made a memory by getting a 1 ton Dodge Dually stuck with a camper. A tire fell off, and I drown my wheeler. Broke some things, but that happens when you mud a rig too hard. I’m from Arkadelphia, Arkansas, and I only had to drive 42 minutes, but it was my first time going. It would have been worth a longer drive. I will definitely be attending following years. I appreciate the opportunity to attend such a fun event.” – Garrett Collie, Arkadelphia, AR

“My name is Jon Whitney, and we drove down from Minnesota. The Southern mud didn’t disappoint! There was plenty of mud trails/holes, and also a good amount of dry trails where we could take it easy and ride on the hills. Can’t wait to come down again next year!” – Jon Whitney, Minnesota

“Hey, first off huge fan of Mud Nationals events. My crew got there about Wednesday afternoon. It was a bit more of a drive than the old location as we were coming out of Houston, TX. Camping was set up nice with easy access. The showers were great, and shout out to the crew working the event. We hit the trails hard. Beautiful trails with lots of diversity, nothing too ridiculous (except China hole). We had a blast and so much fun riding. The only negatives that we could say was lack of network. Cell service was nonexistent, and even the vendors said they were losing sales because of not being able to run cards. The second one, which isn’t really a negative, is there was no real direction on where the party was. In Jacksonville, you knew without a doubt where the party was. Anyways, thanks for a great week. That was the most fun I’ve had trail riding in a long while. Crank It Up Boys!! Will definitely be at Mud Nats next year!” – Anthony Westbrook, Houston, TX

“My crews first ever Mud Nats event. Also, it was my husband Andy’s birthday. So, what better way to celebrate than some fun in the mud. We had an absolute blast!!! Counting down the days until next year.” – Kasey Perkins

“Had a big time. Hit just about every hole I saw. See ya next year!!!!” – Jack Herrington

“Great job as always! Had a blast and ready for next year! Hopefully, will have a High Lifter lift by then!” – Jonathan Heird

“I drove from Texas, and I would definitely do it again. Great experience, great food and great people!!!!” – Justin Myers, @offroad_killing, Texas

“By far one of the best times I’ve ever had!!” – Daniel Walters, Heavy Foot Off-Road, Blevins, AR

“First, I would like to say thank you to all the LEO and EME that were on site. They did a great job. Second, your staff and the way they worked, keeping the lines down and helping everyone, did an awesome job. West TN Mudders (WTM) came five hours from Jackson, TN and the surrounding areas. Some of us for the week and some for the weekend, but all of us had a great time. We will be back next year.” – Tn Steyr, Jackson, TN

“My friend wanted to spend his bachelor party at Mud Nationals 2019. Had the best time and met better people. Thanks High Lifter.” – Harrison Critser