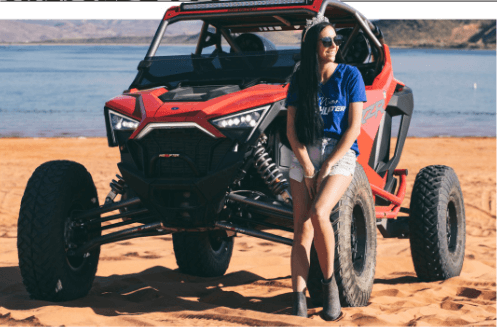 Going to an offroad event like Trail Hero is always something to be talked about. Typically though, we don’t always travel very far from home in order to go to one. A lot of the time, those events are in the same environment us enthusiasts are already accustomed to. Here on the West Coast, that’s mostly rocks, desert, and sand. But what about coming from a completely different environment like what Baylee Day of Conway, Arkansas is used to?

Baylee doesn’t originally come from an offroad background, in fact, her induction was just a mere three years ago. However, three years is more than enough time to experience countless rides as both driver and passenger. The environment she’s grown comfortable with and can tell our West Coast enthusiasts a thing or two about is mud riding. It’s light years different than our realm of earth and she definitely has begun making a name for herself in the industry.

Born and raised in Shreveport, Louisiana, a small town with not a lot going on in it, Baylee spend most of her life there, until one day her mother decided she wanted to move the family to a place which may provide a better future for her and her brother. That destination was Little Rock, Arkansas. Baylee found herself growing there during the better half of her teenage years until graduating high school and moving to Conway to attend the University of Central Arkansas, where she is currently taking online courses for teachings in elementary education. Somewhere in the mix of things, fate would eventually bring Baylee toward the offroad industry.

Baylee: “About three years ago I met my fiance, and through him, we met up with a group of friends that would ride with Rowdy Intentions (a large group on Facebook who mainly does mud riding). During this meeting, I hopped in the backseat of a four-seater with my friends, and ever since then I have not missed a ride.”

“My fiance and I own a 2015 RZR XP 1000, which we use mainly for mud riding, so coming out to Trail Hero is a totally different experience for me. The terrain is a lot different as it is much cleaner, where mud riding is very messy but a lot of fun. I quickly realized it’s dry and hot here where Arkansas is very humid. There’s rock crawling and dune riding here versus where I’m from, there is no sand and little rock crawling. The only similarity I would say is the people. It’s a big offroad family, no matter if you are mud riding, riding the dunes, or rock crawling, it’s all the same. Getting out here, meeting all these people, and this whole experience is once in a lifetime, and I’m happy to be repping the High Lifter name on the West Coast.”

Did we mention Baylee has earned the title of Miss High Lifter?…A company that develops and markets unique, aftermarket accessories for UTVs and other four-wheel drive vehicles. Ironically enough, High Lifter originated in Shreveport, Louisiana. The very place Baylee is from.

There hadn’t been much talk between Baylee and her friends of coming to more events on the West Coast, but after her experiences at Trail Hero, she says she definitely wants to come back again next year. Until then, keep up with her @_baybayday_ to catch a glimpse of her mud riding life.