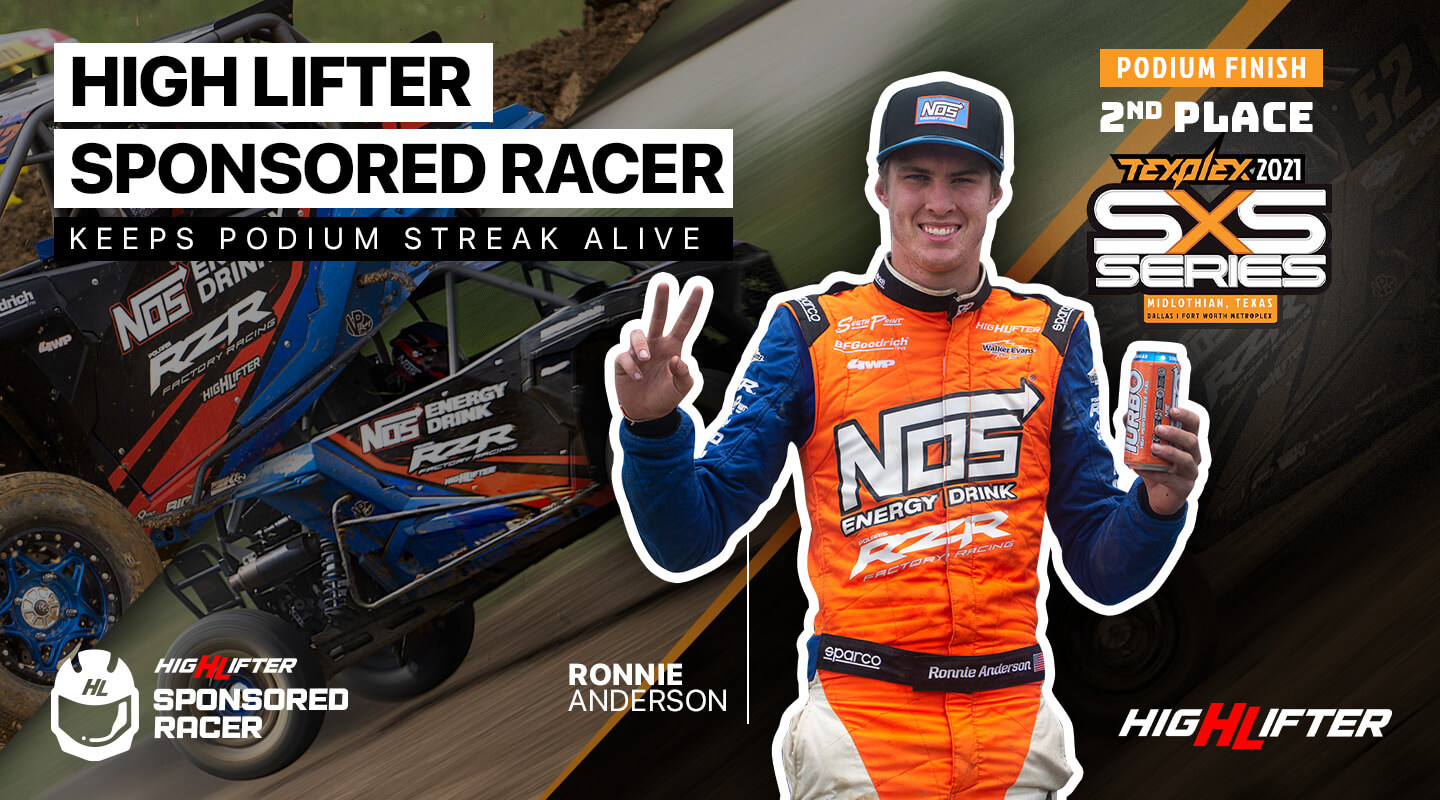 For 2021, Ronnie Anderson will be taking his short course experience to Midlothian, Texas to take on some of the best UTV racers in the world at the 10 Rd. Texplex Park SXS series. In just its 3rd year of operation, the Texplex series has quickly become one of the fastest growing sxs specific series in the country. Not only will Ronnie be competing In the competitive Pro Turbo class with his Polaris Rzr Turbo S, but he will be pulling double duty all season and campaign his NOS Energy Drink Rs1 in the Pro N/A (Naturally aspirated) class as well. This will be Ronnie’s first time returning to this class in 4 years.

Rd. 1 was slated to kick off Feb 20 at the 1,000 acre park in Texas, however, mother Nature had other plans. A severe winter storm struck the Majority of Texas the week leading up to the event and forced the promoters to push back the much anticipated series kick off event. With many deciding factors coming into play, the promoters decided a back-to-back weekend would suit the racers best coming from every edge of the United States.

The work the Anderson Bros team put in this off season appeared to pay off when the boys finally got to hit the track for Rd. 1. Ronnie qualified 3rd in the Pro N/A class and pushed threw a power steering Malfunction in the Pro Turbo Class to bring home a respectable 6th place qualifying run.

The Texplex series operates very similar to a standard motocross series. Both classes race two motos, and the scores from each moto are combined to determine the overall winner. Points are awarded for each moto, starting at twenty-five for first place, twenty-two for second, twenty for third, and so on.

In The Pro Turbo Class, Ronnie Blasted off the Land Rush Start in Heat 1 to grab the first hole shot of the year with his BFGoodrich tires. He went on to lead every lap until a small mistake on the white flag lap forced Ronnie to settle for a 2nd place. The podium finish gave him a great gate pick for the final, where he came out of turn 1 in 5th position out of the 28 car field. Ronnie quickly put a charge on the field and was able to put his Rzr Into 2nd Place right before the half way caution. After the chaotic restart, Ronnie swapped positions with the leader Cody Miller a few times before a drivetrain mechanical would end his day early with 2 laps to go. The finish was heart breaking after the charge Ronnie had put in, but it showed the Anderson Bros showed up to compete for wins in 2021.

While the Pro N/A class is new for Ronnie in 2021, it was clear Ronnie Felt right at home in his new Rs1. Once again, Ronnie would Rocket out the gate with his BFGoodrich Radial T/A’s and come out the gate in 2nd place. After learning from his mistakes in the Pro Turbo class, Ronnie decided to play it safe and would finish in second place in the Pro N/A Heat 1.

In the Pro N/A final, Ronnie would rocket out the gate and come out of turn 1 in first. The track was chewed up by the end of the day and the Walker Evans Racing Shocks would prove to be a huge advantage for Ronnie. After swapping positions with the top four the majority of the race, Ronnies short course experience would prevail to bring home the WIN in the round 1 final. His 2-1 score for the day would best the field and not only would Ronnie bring home the Rd 1 WIN, but the points lead as well. This win would mark the Anderson Bros first win for their new partnership with NOS Energy Drink.

With Rd. 2 being the following weekend, the boys would spend the week in Texas working on the cars to get them prepared for battle in just 7 more days. While all 10 Rds of Racing will be held at the same facility, the Texplex crew makes changes between each round to keep the drivers on their toes. Unlike most short course series, the Texplex track is ,much longer and ranges anywhere from 2-3 miles long per lap.

In the Pro Turbo Class, Rd. 2 would serve as redemption for Ronnie. After having the speed to win in Rd. 1, he wanted to leave Texas with the results to match. Unlike Rd. 1, Ronnie got caught in a turn 1 pile-up in his heat race. The turn 1 contact damaged his 4wd and he would be forced to salvage a valuable 4th place finish in his heat race.

With a less than ideal starting position for the final, Ronnie was able to avoid the 1st turn carnage and come out of turn 1 in the 5th position. While saving his equipment, ronnie put his NOS Energy Polaris into 3rd place at the 1/2 way caution. When the field went green, Ronnie would start applying pressure to the lead two cars. The top 3 checked out on the field and Ronnie would go on to pass for 2nd on the second to last turn, however he couldn’t make it stick in the slick conditions and would have to settle for a 3rd in the final. His 4-3 scores unfortunately left him just shy of the podium for a 4th place finish on the day.

Coming into Rd. 2, Ronnie would have a target on his back being the points leader in the Pro N/A class. His heat race turned out to be one of the best battles the series had seen all year!  Ronnie kept his nose clean and brought home a 3rd place in his heat race.

In the main event, Ronnie jumped out to a strong start once again and would grab the lead in his HOLZ built Rs1 starting lap #2. From there, Ronnie would light the way in his Rigid Industries RS1 and never look back, taking the Rd 2 WIN! His 3-1 score would take him to back-to back wins and extend his points lead! His Anderson Bros teammate (And KOH Co-dawg) Cole Keatts would bring home a 3rd place finish and move into 2nd in points behind Ronnie.

Next event, the Anderson Bros head to Arkansas for the HighLifter Mud Nationals April 7-11. Ronnie looks to carry his momentum in his Polaris Rs1 and try his hand at the CroSXS series and bring home a podium for team Highlifter.https://www.youtube.com/embed/-CHf5Bsd56U?start=1&feature=oembed

Ride Along with Ronnie as he takes the WIN in the Pro NA Class at the TexPlex season opener in his Polaris Rzr Rs1. New Videos every Tuesday on the Anderson Bros Youtube channel!

The Anderson Bros team consists of RJ and Ronnie. With over 20 combined years of racing in off road the brothers have accomplished 7 Off Road Championships and over 200 career podiums. On top of their busy racing schedule, many know RJ for his viral videos producing over 30 million views. RJ is also known as the face of the growing Polaris RZR brand.